A goal deep into stoppage time denied the Shipyard the point they deserved in their opening league fixture of the season as Peebles headed home with all three points. Despite taking the lead for the third match in a row the Shippy were unable to maintain that advantage and slipped to an agonising defeat.

Peebles were unquestionably the dominant team in the first half as Scott Inglis drove wide from a good position and Lee Zavaroni forced Shippy keeper Marcus Taylor to save with his legs. Rovers kept up the pressure as Donovan Ndiweni headed wide before Zavaroni again went close as his low drive hit the outside of the post. The Shipyard struggled to create much throughout the first half but would have been reasonably happy to go in level at half-time. 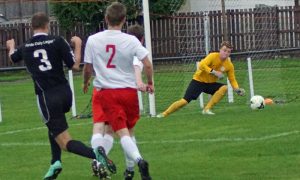 Nathan McKay replaced the injured Danny Butt at the start of the second half and it was McKay who was heavily involved as the Shippy broke the deadlock in the 52nd minute. Peebles keeper Ben McGinley spilled the ball just inside his area and he brought down McKay who had quickly latched onto the loose ball. McKay took the spot kick himself and saw his effort saved by McGinley but he was on hand to knock the rebound home. The visitors appealed for a penalty of their own just a minute later but much to their disgust the referee waved away their appeals. The Shipyard had an escape in the 55th minute when Taylor saved well from Ndiweni and Luke Fleming was on hand to clear the ball off the line from the same player. Peebles drew level in the 61st minute when Zavaroni sided footed the ball into the corner of the net as he got on the end of a cross from the right hand side. The Shipyard almost regained the lead in the 68th minute when Marc Black headed down a Ben Saunders cross into the path of McKay but the sub was denied a second goal as a Peebles defender threw himself in front of the ball to avert the danger. Peebles keeper McGinley held a Craig Winter strike at the second attempt as the Shippy started to look the more likely at this stage. Taylor saved at the feet of Ndiweni who picked up a knock in the process and the young striker could not continue and had to be replaced. With five minutes remaining McGinley produced a stunning save to deny Danny Roberts whose powerful strike looked destined for the top corner. McGinley was in the thick of the action again as the game moved into added time as he pushed away a Luke Fleming effort after the young left-back had shown great skill out on the touch line before driving into the Peebles box and letting fly. However, there was a sting in the tail for the Shipyard as Peebles broke away down the right and when the cross came in Sub Jason Newell lashed the ball in off the underside of the bar to the great delight of his teammates and to the obvious dismay of the Shipyard players.

The Shipyard are on their travels next week as they visit Eyemouth United for a league match. Kick off 2.30pm.