Selkirk hung on to beat the Shipyard in a nine goal thriller in the South Region Challenge Cup as the home team fought back from three goals down to almost take the match into extra-time. It was honours even between the two veteran strikers on show as both netted a hat-trick, however, Kevin Masson was not out shone his more illustrious opponent Gary O’Connor as he more than matched him in a cracking encounter at Recreation Park. Both teams were down to the bare bones with Selkirk only having one sub and the Shipyard two when the game eventually kicked off at 3pm. The Shipyard agreed to a late kick off as the Selkirk team struggled to get to Fife due to traffic congestion, though to be fair, it can just be as much of a problem for the players waiting around for an extra half hour as it is rushing to play a match without much of a warm up. 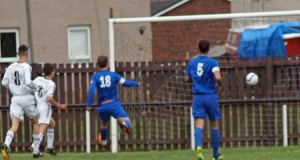 Selkirk were on top in the early stages with O’Connor nodding a free-kick over and Jordan Mushet saving from Ross Gray. The Shipyard took the lead when Masson broke clear of the visitors defence and squared the ball to Pete Bell for an easy tap in. The Shippy had a huge slice of luck a minute later when Mushet saved a close range effort and the Selkirk player following up saw his strike hit the post then bounce into Mushet’s grateful grasp. Not unexpectedly O’Connor was causing the Shippy rear-guard problems and he headed over after beating Mushet to a high ball. Masson drove wide for the Shipyard before the visitors drew level in the 26th minute. The Shipyard defence dithered which allowed the ball to be played through to O’Connor and he lobbed the advancing Mushet from the edge of the box. Murray Christie knocked the ball over from inside the six yard box as the Shipyard defenders challenge was enough to put him off. The Shipyard restored their lead with a fine goal in the 36th minute when Masson received an excellent pass from Ethan Anderson and drilled the ball beyond Jamie Newman in the Souter’s goal. Mushet pushed an O’Connor effort over before the same man drew his team level again, this time from the penalty spot. Again the Shippy defence failed to clear the ball and when Ben Couper challenged the Selkirk player on the goal line the ref pointed to the spot. Although Mushet went the right way O’Connor’s strike was powerful and accurate enough to find the corner of the net. Typically the Shipyard they then conceded two goals in as many minutes as firstly a low ball across the face of goal was turned in by Jack Hay with the Shipyard defence static and then Hay, from a suspiciously offside looking position, placed the ball beyond Mushet to give his side a two goal advantage. 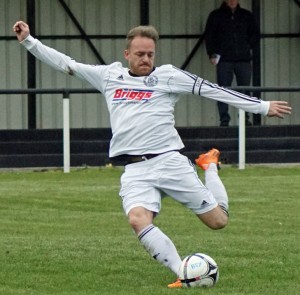 The second half got off to a disastrous start for the Shippy when O’Connor burst clear down the inside right channel and finished well when he drilled the ball across Mushet into the far corner. The Shippy grabbed a lifeline in the 63rd minute when Darrell Anthony set up Masson with some great play and Masson fired the ball home in similar fashion to Steven Fletcher’s strike again Poland for a wonderful goal. Andy MacDonald was back on his line to clear a clever flick from O’Connor and keep his team in with a shout. Bell and Masson both saw shots go over from the edge off the box before the Shipyard had a big penalty shout turned down when Mark James’ shot hit an arm but the referee was not interested. Mushet palmed away a goal bound effort just before the Shipyard were awarded penalty for handball with three minutes remaining. This looked less of a penalty than the previous shout, nonetheless, the home team were not arguing as Masson sent Newman the wrong way to complete his hat-trick and set up a grandstand finish. Anthony produced a great last ditch tackle to keep the game alive and at the other end the Selkirk defender did the same to deny Ewan Henderson as he looked to pull the trigger when through on the keeper. This proved to be the last meaningful action of the match and it is Selkirk who progress to the next round where they will face Civil Service Strollers.
Burntisland Shipyard: J. Mushet; D. Anthony; E. Anderson; A. MacDonald; B. Couper; P. Bell; M. James; C. Lowe; E. Henderson; E. Fotheringham (JP McPhail); K. Masson. Unused Sub: B. Saunders.
Selkirk: J. Newman; M. Samson (K. Reynolds); M. Christie; C. McDarmid; G. O’Connor; S. Ritchie; J. Hay; P. Addison; C. Handren; R. Gray; J. Harley.
Referee: D. Graves.