To say the Shippy made heavy weather of beating nine-man Coldstream would be an understatement, however, at the end of the day the three points travelled north as second half goals from John Martin and Reece Brown settled the match. The aforementioned Brown and Johnny Galloway’s brother Jordan came into the squad as the Shipyard headed to the borders in confident mood following successive league victories.

Both teams attacked from the off and got into the final third but neither keeper was called into any serious action as clear-cut chances were at a premium. Just after the 20-minute mark the Shippy had a spell of pressure as Martin saw his curling effort deflected wide and from the resultant corner Brian Breen headed over. Martin burst clear of the Coldstream defence and after his initial attempt was blocked he was deemed to have handled as he bundled the ball home. A Brodie Hamilton drive was parried round the post by home keeper Jamie Shiel and Martin was again in the thick of the action as he tried to convert from the corner. Captain Sandy Strang, at full stretch, failed to direct the ball on target from the centre of the box after good build up, while at the other end the Shippy were thankful that Dean Anderson was on hand as he stooped low to head off the line. Coldstream were reduced to ten men in the 42nd minute when the referee deemed Shane Bonnington’s challenge on Rab Kinnaird merited a straight red card, though most observers thought the decision was harsh. On the stroke of half-time Martin thundered a header off the bar and Sean Johnstone’s fierce drive was blocked as he followed up. 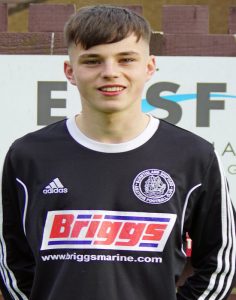 Lee Halpin replaced the injured Hamilton at the break as the Shipyard set about capitalising on their extra man and the first chance fell to Strang but he was off target at the back post in the 54th minute. Two minutes later the Shippy took the lead when Martin cut in from the left-hand side and fired in a low shot that Shiel would feel he should have done better with. Not that the Shippy were caring as they celebrated the goal. It was almost two a minute later when Johnstone set up Strang but the big midfielder dragged his shot wide. There was no argument about another red card for Coldstream in the 65th minute as Kristian Dixon left the referee with no option after a very poor challenge on Brian Breen. This further setback seemed to galvanised the Streamers as they threw caution to the wind and looked for an equaliser. The Shipyard were struggling to re-adjust their shape and Coldstream were seeing a lot of the ball, albeit without creating any scoring chances and it was the Shippy who still looked the likelier. Martin saw a shot blocked before young substitute Brown sealed the points with six minutes remaining. A Kinnaird shot was blocked and when it fell to Brown some sixteen yards out the youngster showed great composure as he drilled the ball into the corner of the net. Fellow sub Halpin drove over after gathering a great pass from Brown as the Shipyard finished the game on the front foot having finally blunted Coldstream’s spirited resistance.

When manager Grant Brough spoke after the game there was a mixture happiness and relief in his mind when he said “At times today it wasn’t very pretty but the objective was to get the three points and keep our run going, so regarding that aspect of the performance, I’m delighted to come away with the win”. He went on to add “Another pleasing aspect for me was seeing Reece Brown make the step up from the Under 20 squad, following his hat-trick in the friendly during the week, and score the decisive second goal after coming off the bench”.