Shippy edged out by students.

For the third week in a row the Shipyard lost by the odd goal, however, against Stirling University it more a case of bad luck than bad defending that caused the defeat and to be fair the students probably deserved their victory. With Alex Lowe on holiday Neil McLeod took the team and there was a surprise return to the squad from Brendan Napier who has been missing due to work commitments. Kevin Masson also returned having been unavailable due to personal issues.

The students dominated the first half and would consider themselves unfortunate not to be more than one goal ahead at the break, albeit there was good fortune about their goal as a wicked deflection took David McGaughie’s long range shot away from Jordan Mushet and into the corner of the net. The University’s Jack Halley was a thorn in the Shipyard’s side all afternoon and in the first half he did everything bar score as he was denied by the woodwork, Mushet twice and a shot just off target. Liam Allison also went close on a couple of occasions before McGauchie broke the deadlock in the 38th minute. The only real effort of note the Shippy had in the opening period was a Masson drive that Stirling keeper Tim Hughes parried away. 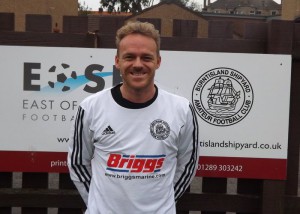 Kev Masson got the Shippy level at the start of the second half.

The second half was a much more balanced affair with the play more end to end and it was the Shippy who had the early pressure which resulted in an equaliser. In the first minute Masson latched onto a loose ball and bore down on goal but unfortunately he pulled his shot wide. However, Masson was not to be denied when he took a pass from Ewan Henderson, drove across the box and fired a right foot shot beyond Hughes. Stirling were upset about the goal as they claimed a throw in should have been awarded to them in the build-up and to be fair it seemed that way. Napier saw a shot deflected in similar fashion to the University goal but his effort looped just over with Hughes stranded. Graeme Haywood produced a good block close to his line to stop the students regaining the lead but the goal was only delayed by a couple of minutes. Once again the goal was controversial as there seemed to be a clear handball by one of the students in the build-up, however, play continued and David Collins was on hand at the back post to shoot past Mushet with an hour on the clock. The Shippy had a let off in the 63rd minute when a shot from a tight angle hit the post and bounced into Mushet’s hands. Henderson headed over for the Shipyard before Mushet held from danger man Halley at the other end. In the 76th minute it was the Shipyard’s turn to be denied by the woodwork as Masson rounded a defender and the keeper before crashing a shot from a tight angle off the bar. Unfortunately for the Shipyard Adam Doig could not steer the rebound on target from around 12 yards. With 8 minutes remaining Hughes pulled off a tremendous save to deny Darrell Anthony as the youngster fired in a shot from 10 yards through a ruck of players. The Shipyard continued to press looking for a leveller but were left dismayed as the ref blew for full-time.